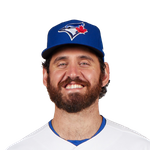 Romano is poised to serve as the Blue Jays' closer after Kirby Yates suffered an elbow injury which will cost him the season. Romano's stuff isn't special, but he had a very solid 2020 campaign, and should see plenty of save chances with Toronto, assuming he's officially named the closer. The relief pitcher landscape for fantasy gets cloudy quickly, so despite the lack of certainty, Romano makes a decent option for your second reliever. Bump him higher if he's officially named the closer before the season.