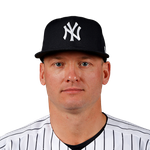 Donaldson again missed significant time with a calf strain last year, and was limited to just 28 games. He hit for power and walked plenty when he was in the lineup, and both his average exit velocity and hard hit rate were at or near his career highs. In other words, there doesn't seem to be much of a decline in his performance over recent seasons. Now in his age-35 season, it sounds like the Twins are going to give Donaldson plenty of rest this year in an effort to keep him healthy. Bank on the power, but assume a maximum of 130 games or so. There's a lot of value in that so long as you factor it in appropriately.