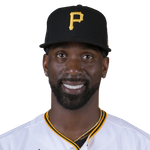 McCutchen returned from his torn ACL and put up a decent season, hitting 10 home runs and stealing four bases in 57 games. If you watched him play, you could see he wasn't 100% himself, and his sprint speed dropped to just 27.4 ft/s, by far a career low. But he looks and reportedly feels healthier this spring, and will lead off again for the Phillies. Expect 20-plus homers, close to double-digit steals, and plenty of runs scored. And because he's an aging veteran, expect him to be a value on draft day.