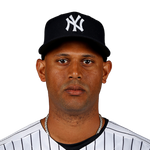 Hicks is reportedly going to bat third for the Yankees this year, and the lineup spot is so valuable that it largely covers a player's warts. Those warts are plentiful with Hicks, including that he's probably going to bat about .240, his power is declining, and he's a huge injury risk. He still walks a ton (including last year's 19.4%), and he'll have decent counting stats if he sticks in the three-hole all year. But there's little upside and he has topped 97 games played just twice in his career. He's best suited as a bench option or a fifth outfielder in deeper mixed leagues.