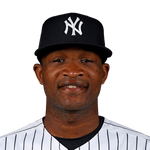 German has won the fifth starter's job after a torrid spring, during which he didn't allow a run over nine innings pitched while walking one and striking out 13. German's off-the-field issues aside, he was a quality MLB pitcher in 2019, and he should be a decent contributor in four categories, especially considering his low walk rate. He's not risk-free, as a downturn in his performance could lead to Deivi Garcia coming back in the rotation. But he's a fine, late-round selection.