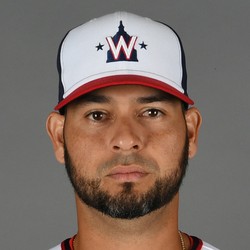 Nationals starter Anibal Sanchez allowed just one hit and struck out three over four scoreless innings in Friday's matchup against the Miami Marlins.

Sanchez is coming off of a solid season for the Nationals in 2019 and is expected to line up as their fourth starter after their big three of Strasburg, Scherzer, and Corbin. He won't wow you with strikeout numbers but is an effective depth starter capable of putting up more than 150 innings with an ERA below 4.00.