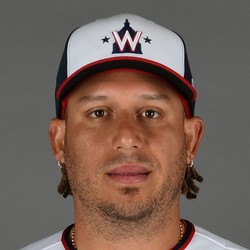 Cabrera never feels exciting to draft but there is much to be said for someone who you can count on for 15 homers, 80 RBIs, 65 runs and a batting average that won't kill you late in drafts.

Asdrubal Cabrera could start at third base for the Nationals

Utilityman Asdrubal Cabrera could start at third base for the Nationals early in the season if the team determines that top prospect Carter Kieboom isn't ready to handle the everyday job to start the year, according to beat reporter Jessica Camerato.

Kieboom hit just .128 in 39 big league at-bats last season, though he managed to bat .303 with 16 home runs in 494 plate appearances at Triple-A. The job is considered Kieboom's to lose, but Cabrera is a veteran presence who could take at-bats away from Kieboom, especially early in the season.