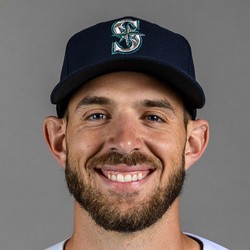 Austin Nola went 1-for-2 with a single, a walk and a strikeout in the Mariners' 2-1 Cactus League loss to the Brewers on Monday.

Nola continued his fine spring on Monday, collecting a single and a walk in his three plate appearances against the Brewers. The 30-year old is slated to be the Mariners' backup catcher with appearances at first base every now and again and isn't worth fantasy consideration unless something happens to Tom Murphy or Evan White.