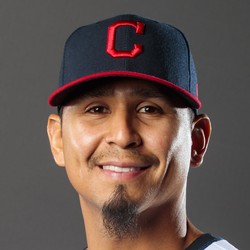 Carrasco was already dealing with plenty of question marks after losing much of last season to leukemia, and now has been diagnosed with a mild hip flexor. He's day-to-day but it's obviously not the start to the spring that Carrasco owners were hoping for. Continue to monitor his progress but he avoids setbacks, he represents a fairly steep bargain in fantasy drafts, given his past performance and the fact that last year can largely be written off to his illness.

Carlos Carrasco (elbow) has built up to pitching six innings

Carlos Carrasco (elbow) says he is "ready to go" and has built up to pitching six innings.

Carrasco's elbow issue from spring training 1.0 appears to be a thing of the past. Even though he's built up to six innings the Indians won't ask him to pitch that deep into a game early on. The expectation is that starting pitchers will be eased in throughout the league.

Brendan Tuma - Too Much Tuma6 days ago