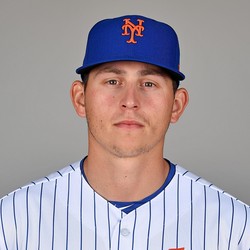 Chris Flexen sent back down to minors after loss to Cardinals

Mets starting pitcher Chris Flexen was optioned back to Triple-A Syracuse following Saturday's loss to the St. Louis Cardinals. He allowed five earned runs on seven hits and four walks while not striking out a single batter over 4 1/3 innings in the loss.

Flexen was probably going to be sent back down regardless of how he pitched on Saturday, but his outing did not make it a difficult decision. Through his first two starts in Triple-A, Flexen has a 5.25 ERA but does have 18 strikeouts across 12 innings.