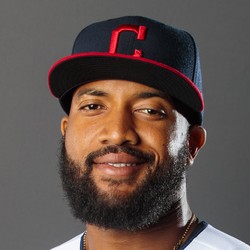 Domingo Santana agreed to a major-league contract with the Cleveland Indians on Wednesday.

After being non-tendered by the Mariners in December, Santana looks set to join the Indians, pending a physical. In 121 games in 2019, Santana slashed .253/.329/.441 with 21 homers and 69 RBI. Cleveland's outfield is pretty sparse with talent, so Santana could carve out a role for himself if all goes well this Spring.