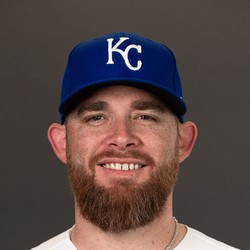 Kennedy was an afterthought on draft day last year, but a run of save chances in the middle of the summer boosted him to 30 saves. His peripherals didn't hurt fantasy owners and his strikeout numbers were solid, making Kennedy the poster child for the "wait on saves" crowd. In the final year of his deal, he'll again open as the closer for the Royals, but his chances of being dealt mid-season are extremely high. Draft him, of course, but don't bank on much more than 15 saves or so.

Kansas City Royals closer Ian Kennedy was charged with three earned runs in a 6-4 Cactus League win over the Diamondbacks on Tuesday.

Kennedy logged one inning of work. He is off to a rough start this spring, having allowed five runs in just two innings of work. That being said, Kennedy saved 30 games for the Royals in 2019 and should open the year as their closer again in 2020.