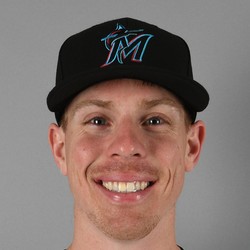 Brigham was making his major league debut with the Marlins after a solid season in the minors. It's unclear when he'll take the mound again. He posted an ERA and WHIP of 3.44 and 1.26 with nearly a strikeout per inning over nine Triple-A starts this year along with work in the lower minors.