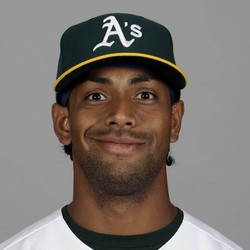 Khris Davis is absent from Wednesday's lineup against the Angels due to the stomach flu.

Davis is unavailable off the bench Wednesday since he remained at the team hotel. The illness doesn't appear to be serious and he is expected to return to the final four game series against the Mariners.