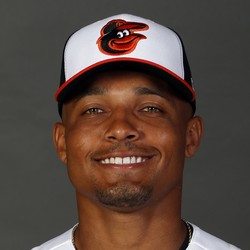 Richie Martin started at shortstop in Sunday's 3-2 victory over the Phillies, but struck out in both of his at-bats.

Martin is competing with Andrew Velasquez to be Jose Iglesias's backup, but he likely won't see meaningful big-league at-bats this year. He could be a source of plug-and-play steals if he were to get time, however.