Import your team in seconds to enjoy…
Get Started >> 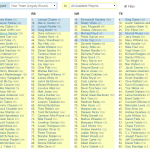 “Most Valuable Fantasy Tool” – Fantasy Sports Trade Association
“This tool is insanely useful. I used it more than I actually used the Yahoo site. Keep up the good work. I’m in for life.” – Josh N.
“Thanks for making the best, most comprehensive fantasy tool out there (and free)!” – Nick D.
“Hands down the best tool you can use for your fantasy team. I got 1st place in 3 out of the 4 leagues I was in.” – Ethan H.
“Excellent tool for fantasy lovers. I have a trophy that says just how good it is.” – Scott H.
“Kudos to helping me win 2 of my 3 leagues and for helping me finish 2nd in the other.” – Matt T.
“Great product. I recommend to everyone except the guys in my league!” – Craig P.
“Fantastic tool. I use it every week for all 4 of my leagues. I had the best fantasy year ever. 2 championships, 1 runner-up.” – Sergio C.
“I’ve been playing fantasy football 12 years now. This was my first championship. My Playbook was the reason. Thanks.” – Barry H.
“Awesome site! Won me $1,500 this year. Thanks!” – David H.
“I literally went from last to first in my 10 man league. I am definitely looking forward to next season!” – Mark W.
“All I can say is bravo. I have used almost all of your competitors’ sites over the years and really there is no need for any other than yours.” – Gareth S.
“Best fantasy tool I’ve found. Please keep it up!” – Paul F.
“Bravo guys…keep up the good work. I was able to win my 1st fantasy football league this year and would not have been able to do it without the help of My Playbook!!!” – Jay D.
“I won my league this year. I was in the championship last year. Won the year before that. Something is going right with this tool.” – Joshua H.
“Amazing tool. Will certainly use again in the future.” – Sawyer R.
“I finished 1st, 2nd, 2nd, 2nd, 2nd, and 3rd in my leagues largely because of in-season pickups suggested by the tool.” – Jeffery B.
“My Playbook is the only tool I look at to make my lineup decisions now.” – Michael P.
“Totally cool all in 1 system. I love the News feeds and the ability to have multiple leagues all in 1 site.” – Ken F.
“I don’t want anyone in my leagues to know about you. I have to keep the Facebook likes and other mentions on the DL.” – Mark P.
“I used My Playbook to manage all of my teams. I easily had my best year winning 4 out of my 6 leagues.” – Erik C.
“I love the site. It’s especially useful for busy weeks when I cannot do a lot of analysis myself. I can just plug and play knowing that I have an intelligent lineup in place.” – Michael H.
“Made it to the championship game in both of my leagues this year despite major injuries to my starters. Definitely benefited from My Playbook!” – Tara G.
“Product is awesome! I have used 2 years now and both years made it to the Super Bowl. This year I brought home the ‘ship and $1,300. So thanks again!” – Bob E.
“Love the interface. Very easy to use. It’s my secret weapon! Will definitely be back next season!” – John N.
“Great site. It is so much better than any site like it. I know I will be back next year.” – Aaron T.
“The overall simplicity was great. It gives you exactly what you’re looking for – a quick snapshot of your lineup choices. If you want more in depth analysis just click the links.” – Mike S.
“This tool is a life saver. I play anywhere between 4-6 leagues a season and this tool is absolutely necessary to keep them all straight.” – David V.
“This tool is amazing – best fantasy tool I’ve used.” – Brian W.
“3 leagues, 2 wins and 2nd most points scored in the league I didn’t win. You guys made me a force.” – Ross H.
“I love it. You guys are making fantasy football fun again.” – Michael R.
“State of the art! It took me a little while to fully realize all of the features but once I did I thought it was phenomenal.” – Robert K.
“Great tool. I used it every week and 2 out 4 leagues and got 2nd place in another.” Ryan S.
“Thanks for making an awesome tool! I’ll be coming back and suggesting to friends!” – Cody A.
“Awesome tool. Was champion of 3 leagues because of FantasyPros. Almost saved my 3rd team after an awful.” – Dave J.
“Will continue to use forever. Just won 2 leagues because of this tool!” – Tim P.
“Keep kicking butt. I was in 3 of 3 Super Bowls and won 2 thanks to you.” – Patrick B.
“Love the entire package. I will definitely sign up for next football season. It’s a no-brainer.” – Richard C.
“I definitely will be using this service for all my fantasy leagues from this point forward.” – Tom A.
“Keep it guys! You have by far the best fantasy football site on the web.” – Nathan D.
“This tool makes fantasy football so much easier to track. I play several teams across different FF sites and did particularly well this past season. I wouldn’t have had time to manage all the teams if it were not for My Playbook.” – Lauren M.
“I cannot say enough about it. This is hands down the best NFL fantasy tool period. I use it for both my seasonal leagues and daily leagues. I would not use anything else. There is no other tool or site that compares.” – Scott B.
“You folks have created the most functional and useful fantasy football site I’ve ever used. I was a first time subscriber to My Playbook this season and now I can’t see myself playing fantasy football without it again. It significantly reduced the amount of time and research I needed to put in to make the playoffs in all 3 of my leagues.” – Beau B.

*FantasyPros is not affiliated with the NFL or fantasy commissioner sites.

You need a FantasyPros account (free) to use My Playbook