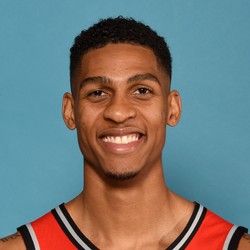 Devin Robinson went 7-for-10 shooting for 14 points to go with five rebounds and three assists in 30 minutes against the Boston Celtics on Tuesday.

Robinson ended his rookie season in a great way, connecting on a team-high seven field goals for a career-high 14 points in his first time playing over 20 and 30 minutes. Robinson ends the season averaging 6.7 points, 2.9 rebounds and 0.9 assists per game.

Devin Robinson played 18 minutes against the New York Knicks, going 3-for-7 shooting with four free throws for 10 points to go along with three rebounds, a steal and two blocks.

Robinson, who went undrafted in the 2017 draft saw his first NBA minutes on Sunday, playing 18 minutes off the bench for the Wizards.