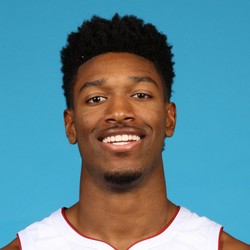 Kyle Alexander has been “full-go” at Disney

Kyle Alexander, as stated by coach Erik Spoelstra, has been full-go in team practices since their arrival in Orlando, “He’s going full-go…so we’re really encouraged where he is right now.”

The undrafted rookie out of Tennessee signed a two-way contract with the Heat earlier this year, however, saw his season come to a halt after suffering a hyperextension and PCL sprain to his right knee. During his time in the G-League, playing for the Sioux Falls Skyforce, he averaged 25.1 minutes of playing time, 10.6 points, 9.1 rebounds, 1.0 assists, .7 steals, and 2.2 blocks per game. Based on his performance in the G-League, it seems as if Alexander has the potential to contribute to the team, albeit in a limited role. The downside is that this will be his first real experience at the next level, as he played zero games for the Heat this year. Due to his lack of exposure, it would be best to keep him on your radar as a speculative play for deep-league action should he somehow find a way into a meaningful role throughout the “seeding games.”