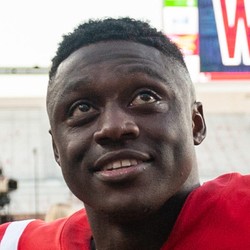 A.J. Brown caught 3-of-6 targets for 51 yards in Tennessee's AFC Championship loss to the Chiefs by a 35-24 score.

Brown made a nice 37-yard reception on the second play of the game but the rookie was held to two more catches the rest of the game. Overall Brown caught just five balls in the playoffs but had a great regular season and will be targeted in upcoming 2020 fantasy drafts.

John Aubin5 weeks ago
A.J. Brown held to one catch in playoff win

A.J. Brown caught 1-of-3 targets for nine yards in Tennessee's Divisional Round upset over the Ravens and rushed one time for nine yards.

After an outstanding rookie season for the Titans, Brown has struggled in the playoffs. Brown has caught just two passes on four targets for 13 yards over the two wins. Brown does have breakout speed and is due for a big play that could come in the AFC Championship against either the Texans or the Chiefs.

John Aubin6 weeks ago
A.J. Brown catches his only target in win on Saturday

A.J. Brown hauled in his only target for four yards in the team's Wild-Card Round win over the Patriots by a 20-13 score.

Brown was red hot to end the season with 25 catches and five touchdowns over his last six games. But the Titans ran the ball through Derrick Henry all night and did not need to use the speed of Brown. The team will need a big play from the rookie receiver in the second round when the team faces the Ravens.

A.J. Brown caught 4-of-8 targets for 124 yards and a touchdown in Tennessee's Week 17 win over the Texans

Brown picked up his fourth 100-yard receiving effort in his past six games, launching him past 1,000 yards in his rookie season. Brown will have a tough matchup against New England's secondary in their Wild Card game.

John Aubin8 weeks ago
A.J. Brown runs for a 49-yard touchdown in loss to Saints

Brown struggled on Sunday as he was covered by the Saints Marshon Lattimore who is one of the top corners in the game. Brown still helped out fantasy owners with his big run for a TD and should be owned in all 12 team leagues and deeper heading into Week 17.