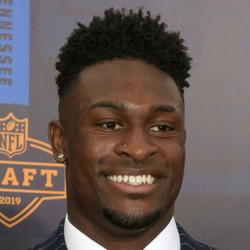 D.K. Metcalf caught 4-of-5 targets for 59 scoreless yards in the Seahawks' 28-23 Divisional Round loss to the Packers.

Metcalf was a weekly WR3/FLEX for fantasy purposes this year, finishing the regular season with 900 yards and seven touchdowns. His rookie season highlight was the team's Wild Card win over the Eagles when Metcalf went off for 160 yards and a score. He'll enter 2020 with room for growth production-wise.

D.K. Metcalf hauled in seven passes for 160 yards and a TD as the Seahawks beat the Eagles 17-9 in the Wild Card round of the playoffs.

The highlights were a 53-yard touchdown and a 36-yard deep ball to clinch the victory. Metcalf's 160 receiving yards were the most ever by a rookie in the playoffs. The 22-year-old should continue to get a lot of looks against the Packers next Sunday.

It was a nice ending to an impressive rookie season for Metcalf. He finishes the year with 58 receptions, 900 receiving yards, and seven touchdowns. Metcalf played in all 16 games and now has a nice matchup in the Wild Card round versus the Eagles.

Brendan Tuma - Too Much Tuma13 weeks ago
D.K. Metcalf fails to catch a pass versus Cardinals

He saw just one target. It was a very odd game for Seattle's passing attack that unfortunately came in the fantasy finals. The Seahawks face the 49ers in Week 17.

Brendan Tuma - Too Much Tuma14 weeks ago
D.K. Metcalf finds the end zone in Week 15 victory

D.K. Metcalf caught two passes for 36 yards and a touchdown as the Seahawks beat the Panthers 30-24 in Week 15.

Metcalf saw just four targets, which were his fewest since Week 5. Part of that was because Russell Wilson attempted just 26 passes but it was also because Tyler Lockett (8-120) was a lot more involved today. Luckily Metcalf still found the end zone, however. He has a nice Week 16 matchup versus the Arizona Cardinals.