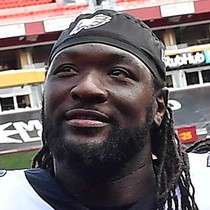 As of now, it's not expected to see Kerryon Johnson on the field this week, so we should see a healthy dose of Blount against the Cardinals. It's not often we expect gamescript to be in his favor, but this is a game where Blount's role could see extended work. On top of that, the matchup is a great one. The Cardinals have allowed a league-high 15 rushing touchdowns this year, including multiple touchdowns in four games. They've also allowed 8-of-12 teams rush for at least 114 yards against them. On average, running backs are able to rack-up 27.6 carries per game against the Cardinals, and knowing Blount has totaled 35 of the Lions' 48 carries over the last two weeks, you should feel relatively confident he'll finish this game with 18-plus carries. Knowing he gets all goal-line carries as well, Blount has high-end RB3 appeal with the only downside being his lack of usage in the passing-game.

Consensus Rankings
View All Rankings
Product Updates
Do Not Sell
Are you looking to contact Customer Support about a subscription or account related question?
Yes
No, I'm a California resident looking for the California Consumer Privacy Act form