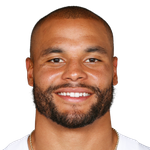 If you were to tell someone that Prescott has had a nearly identical fantasy career as Drew Brees, what do you think they'd say? While it's just a three-year sample size, Prescott has posted top-five type numbers in 22.9 percent of his games, while Brees is at 23.9 percent for his career. How about just top-12 type numbers? Prescott 47.9 percent, Brees at 48.9 percent. Don't devalue Prescott in fantasy, as he's a perfectly fine starter in 12-team leagues, particularly if you're stacked everywhere else