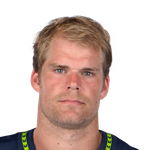 We've made it through another offseason and Olsen is still playing football. He's considered retirement multiple times, but maybe he's returning because his life is probably easier with D.J. Moore and Curtis Samuel on the field? The bad news is that he's no longer the No. 1 target in the offense and he's continually losing targets to Christian McCaffrey, who set the record for receptions by a running back in 2018. Through 16 games the last two seasons, Olsen has seen a combined 76 targets, totaling 482 yards and five touchdowns. He has played through some injuries, so that's not exactly precise, but it's not far off from what you'll get out of him moving forward