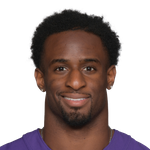 The Ravens clearly wanted to revamp their run-game this offseason, bringing in Mark Ingram in free agency, then drafting the versatile Hill. His game is comparable to Reggie Bush, which is great for the timeshare role he's slated for. Despite weighing in at just 200 pounds, Hill is able to handle a large workload, too, as he tallied 632 carries and 49 receptions in just three years at Oklahoma State. He'll likely start in the passing-down role and can earn more touches as the year goes on