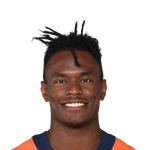 There are some expecting a breakout season from Hamilton after he posted four straight 40-plus yard games with two touchdowns in the final month of the season, but you should have some doubts. Not only is Courtland Sutton the No. 1 option on the team, but they also brought in Noah Fant, a possession-style tight end, in the first-round of the draft. On top of that, Joe Flacco has never really supported a consistent wide receiver in fantasy for more than spurts. Hamilton is talented, but it's likely the wrong situation to expect a breakout