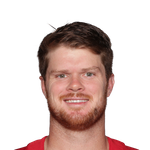 If there's one thing Darnold has going for him in 2019, it's that he's not going to be benched. Duh, right? Well, that's important for those playing in 2QB leagues, as there are other quarterbacks in his territory who have a chance of getting benched. He was hot and cold throughout his rookie season, though it helps they brought in Le'Veon Bell and Jamison Crowder as pass-catching options. The downside, however, is that Adam Gase is his head coach, who traditionally runs minimal plays for his offense