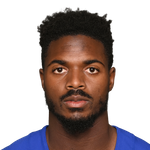 There are many taking solace in the fact that Foster finished with three 100-yard games over the final seven weeks, and while it was impressive, it's not repeatable. He saw more than five targets in just two games, not nearly enough to have consistent production. On top of that, the Bills went out and snagged both John Brown and Cole Beasley in free agency. Unless they bench their leading receiver last year (Zay Jones), Foster won't be on the field very much. It's possible he overtakes Jones, but do you really want the third option on a run-first team. Pass on Foster and let someone else cut him after the first few weeks