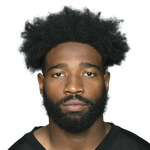 The Steelers have talked about sharing the workload in the backfield, and they reinforced that when they drafted Benny Snell in the fourth-round of the NFL Draft. Samuels was never meant to be a 20-plus touch back, but he's likely going to be involved much more, even when James Conner is healthy. The issue is that Snell is a threat to his upside and would likely be the primary back if Conner were to go down with an injury. Because of that, Samuels may be locked into a Chris Thompson/Giovani Bernard type role, which doesn't do much for your fantasy team. Unless we hear he's the primary backup, he's not someone you should roster