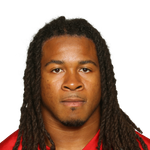 Do you remember Freeman's rookie year? Probably not, because it had him falling outside the top-35 running backs selected the following year. In that season, he totaled just 248 yards and one touchdown on 65 carries. That's significant because that's the only year he played under Dirk Koetter, who is now back in Atlanta as the coordinator. While Freeman will have a much bigger role, Koetter hasn't been able to boost a run-game during his time in Atlanta or Tampa Bay, so the ceiling has likely dropped for Freeman. And that's not to mention Ito Smith, whose role grew as the year went on in 2018