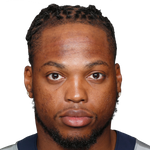 Are the Titans ready to promote Henry to a workhorse role? That's doubtful considering Dion Lewis is still on the roster and they're not paying him close to $5 million this year to sit on the bench and be a cheerleader. Henry deserves more touches, that much is certain, but what happens when the Titans fall behind in a game? Lewis is far-and-away the better pass-catcher, which means Henry will be gamescript-dependent. If you believe the Titans are contenders and will finish with a winning record, that's a vote of confidence for Henry, though it's hard to say that with any confidence. He's the ultimate boom-or-bust running back, which is why he's best-suited as an RB2