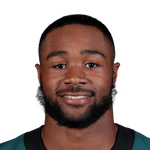 There are many who believe Sanders' three-down skillset will make Doug Pederson change his ways, though you shouldn't be so sure about that. During his three years in Philadelphia, there has been just one running back who has topped 42 snaps in a game, and that was Darren Sproles, who is more of a scat-back than a traditional one. They also traded for Jordan Howard, who is likely to steal some goal-line work, as he was really good in that role with the Bears. Sanders is likely to end the year as a top-25 fantasy running back, but it'll likely be a bumpy road, similar to how it was with Jay Ajayi