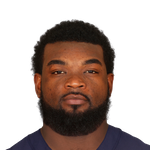 It's never a bad thing to have the running back attached to Andy Reid's offense, though Williams shouldn't go inside the top few rounds due to his question marks. He's still yet to have more than 13 carries in a regular season game, so what makes us believe he's going to stand up to a full workload? The Chiefs just snagged LeSean McCoy when he was released by the Bills, making the situation even more sticky. Not to mention the performance by Darwin Thompson in the preseason. It's possible that Andy Reid moves to somewhat of a timeshare, though Williams should be the starter out of the gate.