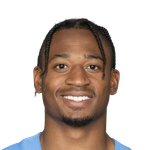 Jackson has run well in the first three games, but has been overshadowed by Austin Ekeler's dominance, particularly in the passing game. With Melvin Godon returning, Jackson's minimal value should nearly evaporate by Week 6. But for Week 4 against the Dolphins, when Gordon will be out, and Week 5 against the Broncos, when Gordon's role may be minimal, Jackson is someone who fantasy owners can likely play in a pinch.