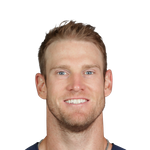 It was a great performance by Tannehill in Week 7, as he played much better than anyone anticipated in a semi-tough matchup with the Chargers. He completed 23-of-29 passes (79.3 percent) for 312 yards (10.8 yards per attempt) with two touchdowns. The best part was that according to NextGenStats, his expected completion-rate (based on the depth/window of his passes) was just 57.2 percent, a massive 22.1 percent improvement. The closest quarterback in Week 7 was Aaron Rodgers who was 13.9 percent over expected. Now on to play the Bucs, who've turned back into the defense we remembered from last year. Over the last four games played, they've allowed 114-of-170 passing (67.1 percent) for 1,394 yards and 10 touchdowns. That's an average of 348.5 yards and 2.5 passing touchdowns per game, and that's not even including Daniel Jones' two rushing touchdowns in that stretch. What makes those stats even worse is when you realize they haven't played a single top-15 quarterback in them (Daniel Jones, Jared Goff, Teddy Bridgewater, and Kyle Allen). They're sacking quarterbacks just 4.9 percent of the time, which ranks as the ninth-lowest mark in the league, and they were able to generate pressure on just 15.8 percent of Bridgewater's dropbacks in Week 5, then just 23.5 percent of Allen's dropbacks in Week 6. If you're looking for a streamer who's available in 95 percent of leagues, Tannehill has the look of a high-end QB2 this week.