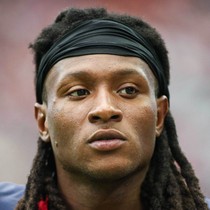 The absence of Fuller had allowed him to receive at least 11 targets in each of the last four games. It seems like Fuller may be back this week, which could potentially lower his target floor into the 7-8 target range. The Ravens secondary is not a friendly one, as the combination of Marcus Peters, Marlon Humphrey, and Jimmy Smith is one of the best in the league. We did see the Patriots highlight their receivers underneath against them, as both Mohamed Sanu and Julian Edelman each tallied 10 receptions, though they both finished with less than 90 yards. This may actually fit Hopkins' role on the team, as his average depth of target is just 9.4 yards down the field, while Fuller's at 13.7 yards, and Stills is at 11.5 yards. His primary matchup will be with Jimmy Smith, who returned from injury just two weeks ago. He's allowed 5-of-9 passing for 38 yards and a touchdown over the last two weeks, but Hopkins will test him. The last time Hopkins played the Ravens was in Week 12 of 2017 where he went off for 7/125/0. Smith was the one in coverage on five of the targets, where he allowed five catches for 108 yards. Start Hopkins as a solid WR1 even if it is a tough matchup.