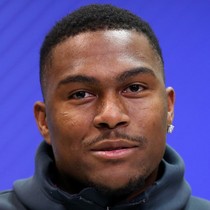 He's now seen at least six targets in 9-of-10 games as a starter, which gives you confidence starting him most weeks as a receiver with a stable floor. In the seven games with Dalton, he's totaled at least 50 yards in six of them. Now onto a matchup with the Browns, who do have much better perimeter cornerback play than in the slot, which is a downgrade for his stock. The duo of Denzel Ward and Greedy Williams has combined to allow just 39-of-81 passing for 555 yards and two touchdowns. That's a weak 48.1 percent catch-rate, 6.85 yards per target, and a touchdown every 40.5 targets in coverage. That's not a matchup you should be attacking with many receivers. Because of that, Tate must be downgraded, as he doesn't have as high of a floor as he typically would. Still, he's a big-bodied receiver who would benefit from them falling behind, like the implied line says. He's a mid-to-low-end WR4 this week, and not one you must play.