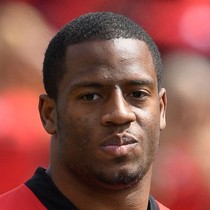 Since joining the team, Hunt has now outscored Chubb in three of four games if you're playing in a PPR format. Hunt is doing a lot with a little, and those targets are worth more than twice as much as carries are. If you were ever looking for a game for these two back to simply go wild, this is it. The Bengals have faced an average of 29.5 running back touches per game this year, which is more than enough touches to go around. Even better? They've allowed a well-above-average 4.67 yards per carry, 7.38 yards per target, and consistently struggle with tackling. Chubb and Hunt have combined to break 84 tackles this year, which is the most of any duo in football. Knowing the volume will be there, combined with their efficiency and tackle-breaking potential, and this has multiple touchdown game written all over it. They have allowed 12 different running backs to total 14.2 or more PPR points against them, which is tied for the Lions as the most in the NFL. Chubb is an elite RB1 who has totaled at least 20 carries in eight of his last 10 games. While his lack of usage in the passing game is a bit frustrating, he's worthy of cash games this week.