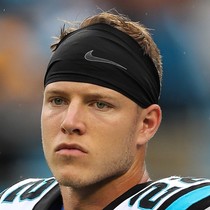 Week 13 was one to forget for McCaffrey, who had a rare bad game. If only everyone else's bad games netted a top-15 finish in PPR formats, eh? Despite not scoring in his first matchup with the Falcons, McCaffrey totaled 191 total yards and finished as the RB1 on the week in PPR formats. Going over his last three matchups with the Dan Quinn defense, McCaffrey has totaled a ridiculous 37 receptions for 300 yards, though he oddly hasn't scored a touchdown on them. Those would be elite numbers for a wide receiver, let alone a running back. If he has another game like he did in Week 11, we could see McCaffrey make a push for the elusive 1,000/1,000 season. As of now, he's on pace for 1,556 rushing yards and 859 receiving yards. The only two running backs to ever do it were Marshall Faulk (1999) and Roger Craig (1985). Running backs have not been particularly efficient against the Falcons this year, as their 0.77 PPR points per opportunity against them ranks as the 12th-fewest. Still, McCaffrey isn't every running back and it's not like you're contemplating sitting him. I just need something to write here is all.