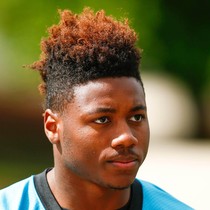 It seemed as if Samuel was going to make up for lost production last week when he caught a touchdown early-on, but Allen's struggles limited his output. While he did finish with 65 yards and a touchdown, it could've been so much more, as Allen completely overthrew him on what would have been an 81-yard touchdown where Samuel's defender fell down. That's been the case with Samuel all year, as Allen has been the league's most inaccurate deep-ball passer, as he's completed just 8-of-38 passes that have traveled over 20 yards. The Falcons have allowed 45 pass plays to go for 20-plus yards, but again, you're relying on Allen to hit Samuel in stride. Knowing he's seen at least six targets in 10 of the last 11 games, Samuel should still be in high-end WR4 territory. It's more about Allen than it is about the matchup, which has gotten much harder over the last month.