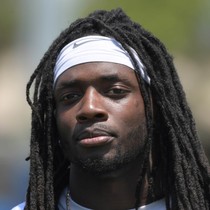 This backfield split over the last four weeks has gone like this: Gordon 89 opportunities (76 carries, 13 targets), Ekeler 55 opportunities (32 carries, 23 targets). Knowing that targets are worth an average of 2.3 times as much as carries in PPR formats, their opportunity is closer than it seems, and more like a 55/45 split. It's Gordon's area of dominance this week, though. The Jaguars have been straight-up dominated against the run over the last four games, allowing 638 yards and 106 carries (6.02 yards per carry) and seven rushing touchdowns. They've allowed multiple rushing touchdowns in each of the last three games, as the loss of Marcell Dareus has proven to be too much. Knowing Gordon's hit 20-plus carries in three of the last four games and that he's gotten 15 of the 20 goal-line carries in that time, he should be locked into lineups as an RB1 this week. Knowing that Ekeler's opportunity is worth more than most think, his role shouldn't be needed as much in this contest.