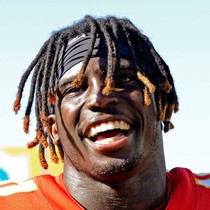 In a game that produced 82 points, the odds of Hill not exploding seem quite small, right? Well, he finished last week with just 45 total yards and no touchdowns while seeing just four targets and losing a fumble. It's a blip on the radar, as it's possible the big hit he took early-on in the game affected him. Looking forward to the matchup against the Titans, he's likely going to cause them issues. They have Logan Ryan covering the slot, who's solid in coverage, but not when he's asked to cover speed. There have been multiple touchdowns he's allowed this year where he's just been outrun and there was nothing he could do about it due to physical limitations (ran a 4.56-second 40-yard-dash when he came into the league back in 2013). He covers the slot for the Titans and that's where Hill lines up about 45 percent of the time. It should come as no surprise that Hill tagged the Tennessee secondary for 11 receptions, 157 yards, and a touchdown back in Week 10. The only player in this secondary who has the speed to compete with Hill is Adoree Jackson, who doesn't shadow (and also wasn't great in shadow coverage). Hill is likely the best wide receiver on the slate this week and worth playing in cash games.