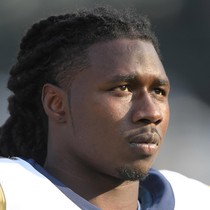 The good news: Watkins finished last week with 11.0 PPR points, which was his highest total since Week 9. The bad news: he saw just two targets for the second game in a row. Those are back-to-back season-lows for him (aside from the game he had to leave in the first quarter). He's still a full-time player in the offense and maybe it helps that Demarcus Robinson dropped, like, 20 passes last week. There was a two-game stretch earlier this year where Watkins had back-to-back three-target games, then bounced back to eight targets after that, so it's possible you're getting a full-time receiver who'll be targeted by Mahomes at a major discount. The Chiefs flip-flop Watkins with Tyreek Hill in the slot, so Watkins will also see a lot of Logan Ryan as well, but he'll more than likely face a mix of the Titans' cornerbacks. As a whole, they did allow a solid 8.59 yards per target to wide receivers, ninth-most in the league. The issue is that Watkins didn't take advantage in the first matchup despite seeing nine targets, finishing with just five catches for 39 yards. At his price, we'd take that performance again, though nine targets appears unlikely with his current role. I wouldn't say you're crazy to play him in cash given the uncertainty around wide receivers on the slate, but he's far from a sure thing. Still, you're going to need some cheaper options.