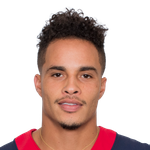 Stills wasn't heavily involved last year after a preseason trade to the Texans, and he missed three games do to injuries. But he did rank seventh in the league in yards per target and had the fourth highest catch rate (72.7%) among wide receivers. Although DeAndre Hopkins is gone, the Texans added Brandin Cooks and Randall Cobb, so it's unlikely that Stills will suddenly have an important role on the team. Given that he's never had more than 63 catches or 931 yards receiving, it's unlikely that he'll be worth rostering this season.