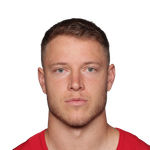 You can try to make the argument that McCaffrey shouldn't go No. 1 overall this year, but you'd lose the argument. Outside of saying, "running backs don't repeat as the top option," there's nothing that should suggest McCaffrey won't. He's not just a running back. He's a wide receiver. He scored 182.5 half-PPR points through the air alone, which would've been the No. 20 wide receiver in fantasy last year, ahead of Stefon Diggs. Even if McCaffrey simply stopped playing football in Week 12, he would've finished as the No. 1 running back by a massive 22.1 PPR points. The new offense and improved quarterback play shouldn't hurt at all.