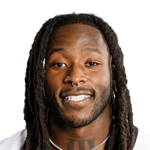 There's just one running back who's had a higher "boom" percentage (25-plus PPR points) than Kamara over the course of their careers, and that's Christian McCaffrey. Kamara has now topped 25 PPR points in 14 of his 45 career games, which is quite ridiculous. His 2019 season was easily his worst to date, though he still finished as the RB12 despite missing two games. The Saints offense continues to groove, and though Drew Brees is still playing great football, his arm strength is declining, which could lead to more targets than every for Kamara, who's averaged 6.7 targets per game over the first three years in a Saints uniform. Provided he doesn't get hurt, Kamara is a near-lock to finish as a top-six running back.