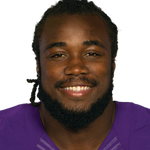 It turns out Gary Kubiak is very good for a run-game. Cook took his game to another level in 2019, finishing as the No. 5 running back despite missing two games. Not only did he total 18-plus carries in eight games, but he also ranked third in yards per route run among running backs. With Stefon Diggs gone, we could see him highlighted even more in the passing game, though Justin Jefferson will eat some of them. Cook also led the league with 21 carries inside the five-yard-line. Health has always been a question mark with Cook, but when healthy, he's easily a top-10 back.