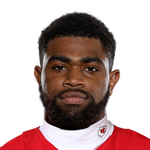 I had Edwards-Helaire as my top running back in this year's class due to the way he fits the NFL today. He's a true three-down back who can catch 80-plus passes out of the backfield, while running for 1,000-plus yards. Landing with the Chiefs was a dream scenario, especially in the first round. Over the last seven years, running backs who've been drafted in the first round have averaged 280.7 touches in year one. 75 percent of them have finished as an RB2 or better. Don't think this is Darwin Thompson all over again, as he was a sixth-round pick last year, and those average just 29.8 touches in year one. This is Edwards-Helaire's backfield after Andy Reid said he's better than Brian Westbrook on film. You don't take those players off the field very often. He's worth a second-round pick and would be a steal in the third round.