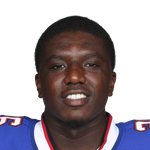 There were many celebrating the end of the Frank Gore era in Buffalo, but they went out and added one of my favorite backs in the draft, Zack Moss, to use in that Gore role. GM Brandon Beane said, "I think more of the goal line and things like that as we did with Frank last year, you'll see Zack do. I think Devin will do a similar role that he had." This is your reminder that Singletary had just two carries inside the five-yard-line all year, while Josh Allen had five, and Frank Gore had 11. That's a crushing blow to Singletary's value.