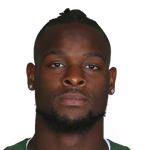 You're going to see Bell fall down draft boards this year, and further than he should. That's odd for me to say, as Bell was someone I was avoiding like the plague in drafts. The difference? Expectations. Playing him as your first-round pick in your RB1 slot was never something anyone should've expected, especially behind that offensive line and in Gase's offense. While he's still stuck in Gase's offense, the offensive line was upgraded quite a bit this offseason, which should allow Bell more room to work. Even if he repeated his 2019 performance, that's RB2 production. There were just 11 running backs who produced RB2 or better numbers more often than him. Sure, he didn't have a ton of weekly upside, but he was safe. Now coming off the board outside the top three rounds, Bell is a value play.