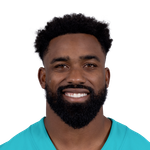 After the way Mostert played in the playoffs, many were looking forward to a 2020 breakout season, and it helps knowing that Matt Breida was traded to the Dolphins. The issue is that they are getting Jerick McKinnon back, still have Tevin Coleman, and Jeff Wilson. The passing game also got a new weapon, which could lead to slightly more pass attempts. Despite being on the roster the past two years under Shanahan, Mostert has received 171 carries in 25 games. It's tough to see that changing drastically. There's a chance, which is why he's in the high-end RB3 conversation, but there's also a chance you can't start him with confidence every week.